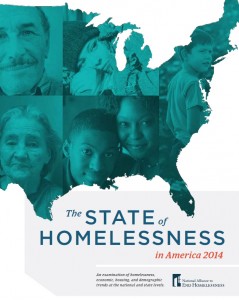 The State of Homelessness in America 2014 is the fourth in a series of reports that chart progress in ending homelessness in the United States.

It examinesÂ trends in homeless between 2012 and 20 13, trends in populations at-riskÂ of homelessness from 2011 to 2012, trends in assistance available to personsÂ experiencing homelessness, and es tablishes a baseline fr om which to measure Â changes in the homeless assistance system enacted by the Homeless Â Emergency Assistance and Rapid Transition to Housing (HEARTH) Act.

This report is intended to be a desk top reference for policymakers, journalists, and community andÂ state leaders.

Chapter 3 analyzes beds available to homeless persons and usage of those resources, and establishes a baseline from which to examineÂ shifts from transitional housing t o rapid re-housing and permanent supportive housing.

This reportÂ uses the most recently available data from a variety of sources: the U.S. Department of Housing andÂ Urban Development (HUD), U.S. Census Bureau, and the U .S. Bureau of Labor Statistics.

On a single night in January 20 13,610,042 people were experiencing homelessness. From 2012 to 2013, a period of continued slow recovery from the Great Recession, overall homelessnessÂ decreased by 3.7 percent and homelessness decreased among every major subpopulationâ€”families (7 percent), chronically homeless individuals (7.3 percent), and veterans (7.3 percent).

But nationwide trends do not t ell the full story:
â€¢ 31 states saw a decrease in homelessness, while 20 states saw increases in overallÂ homelessness.
â€¢ The national rate of homelessness fell to 19 homeless persons per 10 ,000 people in theÂ general population, but the r ate in individual states ranged from 106 in Washington, DC Â to 8 in Mississippi.
â€¢ The rate of veteran homelessness fell to 27 homeless veterans per 10,000 veterans inÂ the general population, but the rate in individual states ranged from 28 in WyomingÂ to 156 in Washington, DC.

You may download the full report by clicking here:Â State of Homelessness 2014

Soaring rents are putting many families in peril

Harvard study finds some in Mass., US spend half of income on housing

Rapidly rising rents in Massachusetts and across the country are making housing unaffordable for a significant share of families and pushing many into homelessness, according to a study released Monday by Harvard University.

Massachusetts has the sixth-highest median rent in the nation as the supply of rental housing has failed to keep up with the surge in renters following the recent housing collapse and foreclosure crisis, according to the study from Harvardâ€™s Joint Center for Housing Studies. More than one in four renters here and nationally must spend more than half their income on their housing, a level the report described as â€œunimaginable just a decade ago.â€

â€œThese are troubling trends,â€ said Eric Belsky, executive director of the Joint Center for Housing Studies. â€œIn this kind of situation, you worry about peopleâ€™s ability to get into any kind of rental housing.â€

Another study of the local housing market, released in October, found that rents in Greater Boston were the third highest among the nationâ€™s metropolitan areas. Rents in Greater Boston averaged $1,800, compared to $1,300 a decade earlier, according to the study by Northeastern University researchers.

The climbing costs of rental housing are falling most heavily on the poor. In general, housing specialists say, paying more than one-third of income in rent can lead to other financial burdens for families. But nationally, more than 70 percent of families earning less than $15,000 a year pay more than half their income in rent, according to the Harvard study, compared to less than 1 percent of households earning $75,000 a year or more.

As rising rents take bigger shares of income, federal and state governments, including Massachusetts, have cut funding for housing subsidies, such as the federal Section 8 voucher program.

The result, housing advocates say, has been rising homelessness in states with fast-rising rents. A recent Department of Housing and Urban Development report said the number of homeless people in shelters and living on streets in Massachusetts has risen 14 percent since 2010 to nearly 20,000 in January 2013, even as homelessness declined nationally.

In Massachusetts, the number of families in the stateâ€™s emergency shelter system rose to an all- time high last month, averaging more than 4,000 a night. The state spent a record $46 million last fiscal year to house families in need of emergency assistance in motels, up from about $1 million in 2008.

Angela Rascoe, 46, had to give up her Mattapan apartment in June, when she became sick, lost her job as a nanny, and could no longer afford the rent of $1,650 a month. She has since lived in emergency shelters, including a motel in Saugus, with her 18-year-old daughter, because she cannot find another apartment she can afford on her disability check.

They are now staying in a state-funded shelter in Mattapan, but the future is uncertain. She has applied for subsidized housing programs offered by the city and state, but waiting lists are years-long.

â€œIâ€™ve never ever been in a situation like this where I had to go and ask for help,â€ she said. â€œItâ€™s extremely hard.â€

John Drew, executive director of Action for Boston Community Development, a nonprofit social service agency, said the situation is only likely to get harder for Rascoe and other low- and moderate-income families. As the influx of highly paid technology, biotechnology, and other professionals drive housing prices higher, he said, the apartment building boom in the city is mainly adding luxury units, rather than affordable homes.

â€œEveryone is sitting back and watching the market-driven economy,â€ Drew said. â€œThere is no housing policy. Nothing that leads you to feel comfortable at all, to say, â€˜We have a way out of here.â€™â€‰â€

State officials defend their policy efforts, calling them comprehensive but constrained by funding limitations. Massachusetts is one of four states to offer state-subsidized public housing, and this year alone increased the number of units the program funds by 3,000, said Aaron Gornstein, stateâ€™s undersecretary for housing.

The state also has built or is in the process of building 4,500 affordable rental units this year, Gornstein said. Earlier this month, Governor Deval Patrick signed a $1.4 billion bonding bill to finance the rehabilitation and construction of more public and affordable housing.

â€œWe just have to keep focusing on helping families access affordable housing with the resources we have,â€ Gornstein said, â€œand make the best use of the existing resources that the Legislature has provided to us.â€

Kelly Turley, director of legislative advocacy for the Massachusetts Coalition for the Homeless, said the state has done more than many others to address the need for affordable housing, but rising rents, wage stagnation, and stubbornly high unemployment have outstripped those efforts.

â€œThe state has made unprecedented investments in housing and homelessness prevention and emergency services,â€ she said, â€œbut at the same time, itâ€™s not enough to match the need to address the gap between incomes and what it costs to live in Massachusetts.â€

Libby Hayes, executive director of Homes for Families, a Boston advocacy group, said the stateâ€™s efforts have been to put a â€œBand-Aid on a big gaping wound.â€ Patrick, she added, has not aggressively addressed the issue as a rising tide of families fill state shelters and motels.

Megan Woolhouse can be reached at megan.woolhouse@globe.com.

Article can be accessed here:Â http://b.globe.com/19cxuAX