WASHINGTON â€” Americans who passed part, but not all, of the GED test are rushing to finish the high school equivalency exam before a new version rolls out in January and their previous scores are wiped out. About 1 million people could be affected.

With the new version, test takers must use a computer instead of paper and pencil. The test itself will be more rigorous and cost more â€” at $120, the price in some states will be significantly higher than previous versions. Some places may subsidize all or part of the cost.

â€˜â€˜This is the thing thatâ€™s sort of putting the spur in the saddle,â€™â€™ said Lecester Johnson, executive director of Academy of Hope, an adult charter school in Washington. â€˜â€˜People just donâ€™t want to start over.â€™â€™

Test takers have been warned for more than a year about the approaching Dec. 31 deadline to complete the test. States and localities are phoning people, and thousands of letters have gone out â€” including to 32,000 Californians who passed parts but not all the test in the last two years.

â€˜â€˜We donâ€™t want anyone to be caught off-guard and come in and test in January or February thinking they have their old scores, and they have to start over,â€™â€™ said Pam Blundell, who oversees adult education for the Oklahoma State Department of Education. She said Oklahoma sites have added additional test days and referred students to other sites.

Nicole Chestang, executive vice president at GED Testing Service, said the rush was expected. In 2001, the year before the last upgrade, there was a 30 percent increase in test takers, most toward the end of the year, she said.

She advised people to register for the exam now, even if they do not take it until later in November or December.

Some critics have challenged the price increases and the mandate that test takers use a computer â€” issues that affect many people living in poverty.

This is the first upgrade since for-profit Pearson Vue Testing acquired a joint ownership interest in the GED Testing Service. For 70 years, the service has been run by the nonprofit American Council on Education. 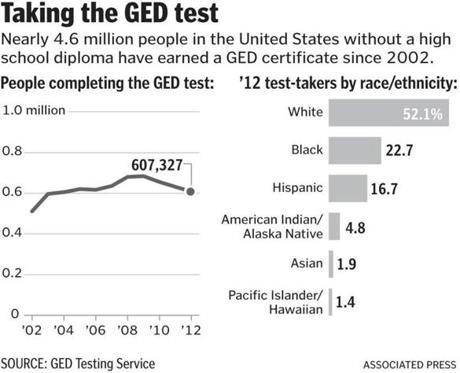 GED exam officials have said the changes will modernize the test and align it with new college and career-ready standards adopted in a majority of states. They say basic computer skills are needed in a modern workplace â€” even to apply for jobs at places such as retail stores and fast-food chains.

On a recent test given to adults worldwide of workplace skills including math, reading, and problem-solving using technology, American adults scored below the international average.

The test also will allow people to receive their scores the same day, rather than having to wait a month or more.

Frustrated with the changes, some states have opted instead to begin using other high school equivalency exams. One is Wyoming, which has adopted the use of two other tests.

Jim Rose, executive director of the Wyoming Community College Commission, said officials are exploring whether students who have passed sections of the GED can apply that toward passing one of the other high school equivalency exams.

â€˜â€˜Our centers are really committed to trying to make this something that is workable for students instead of a kind of high-stakes, winner-take-all game in which if you donâ€™t complete by December, then youâ€™ve got to begin again, and thatâ€™s going to create a hardship for students,â€™â€™ Rose said.

In Washington, D.C., Antoinette Mitchell, a deputy assistant superintendent of education, says she feels some urgency. â€˜â€˜We are trying in numerous ways to get the word out to get them to come back,â€™â€™ she said.

In a low-income neighborhood on the new campus of the Carlos Rosario International Public Charter School in Washington, Principal Jorge Delgado said that instead of a last-minute rush, enrollment is declining as word spreads that the GED exam will soon be offered only by computer. The school, which has students from more than 20 countries speaking 40-plus languages, has added new computer literacy classes. Still, he said, many English language learners are intimidated by computers.

Delgado said many of the schoolâ€™s students work in the hotel and restaurant industries and that passing the GED test will allow them to get a promotion to a supervisory position or enter a training program. Some are taking care of families and barely sleeping as they juggle responsibilities. He said he does not understand why the GED exam is not more flexible about allowing English language learners to take the test using a pencil and paper.

â€˜â€˜Why put more blocks in front of them? Why more obstacles when they are doing their best?â€™â€™ Delgado said. â€˜â€˜What Iâ€™m seeing is students giving up already.â€™â€™

One student at the school who is not giving up is Natnael Gebremariam, 32, from Eritrea in East Africa. He goes to class in the mornings, works about 50 hours a week in the afternoons and evenings at a fast-food restaurant, then spends some nights doing homework past midnight.

The former teacher in his home country wants to work in information technology in the United States. He said the pressure he feels isnâ€™t so much about the test changing, but wanting to pass the GED exam so he can take college classes.

â€˜â€˜All I know is I have to be ready by the end of this year,â€™â€™ Gebremariam said in an interview in between classes.