Collores is one of the most named barrios in Juana Díaz PR. It was the birth place of  poet Luis Llorens Torres, one of the most important journalists of the first decades in the 20th century in PR. As a lawyer, playwright, politician and poet, he was responsible for the immortalization of the beauty of the rural areas of Collores in his writings. But in recent decades some of the beauty of “El Valle de Collores” was lost as a result of poor management of the solid waste.

Due to the collaborative strategy and the efforts between the “Solid Waste Taskforce” members and the communities, we can appreciate a positive change.  The Natural Resources Department contacted RCAP to refer a situation with the establishment of an illegal dumping site in the Agustinillo Sector at the road 512 km 4.2.  The place near the river is been used for the accumulation of solid waste for future pickup by the municipality.  Using the information in the RCAP solid waste brochure published in the community newspaper, some residents called the DRNA  Vigilant Corp. to complain about the problem. The lieutenant in charge, looking for a more proactive way to deal with the situation, oriented the residents in the sector and some interviews were made by RCAP TAP. 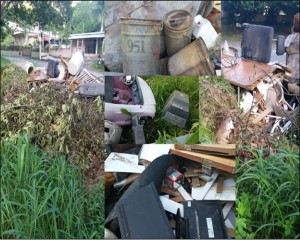 “The residents who agree with this practice alleged that the area was designated by the municipality employees who collect the materials. They also claimed that the collection service has been delayed for a few weeks; according to them, maybe more than two months.”

With the assistance of the DRNA the residents were oriented about the consequences of that practice for the environment, the river and their health, also the legal penalties associated with the intervention from the DRNA and the police.

The community ceases the practice and contacted the municipality officers for the collection with the information provided during our intervention.  TAP call the Juana Díaz DTOP Director to let him know about the situation and coordinate the removal of the materials. The DRNA on their part contacted JD DTOP to require action on the collection of the materials. The municipality took action immediately.

With the participation of residents of the Agustinillo sector, TAP performed a cleaning and restoration of the area used for illegal dumping.  The small illegal dumping site in progress was stopped and eliminated. The place was programed for the developing of a land scape that will be adopted by community members.  Community groups such as; the Colectivo Valle de Collores, were involved in the process and additional members of other sectors will be contributing with the design of a landscape.

The DRNA donated endemic bushes for the place.  The activity was reported to the Regional Offices of DRNA and all stakeholders, as a result of this, the State Department of Transportation and Public Works collaborated with the initiative and invited the community to their nursery for orientation and selection of other ornamental plants. The adoption of the area is going to be made formally by DTOP. The residents are in the process of developing a project in which they can integrate food crops and ornamentals in the area in order to address the interest of residents with different interests.  Some banana trees were planted in the background as suggested by the some of them.

The PR Natural Resources Department Vigilant Corp was present on the cleanup and the possible violators of the law were identified for orientation about the situation and the possible repercussions of their behavior.  A sign donated by Colectivo Valle de Collores was placed in the area with a positive message: “ Isla Adentro: peces, flores, pájaros, aire puro, aguas cristalinas… 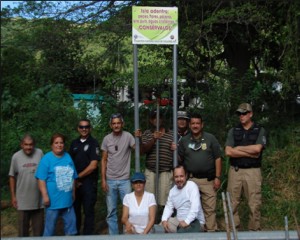 After a few months the place remains clean and the donated plants are in the area waiting for the final design and the top soil conditioning. Collores is going back to be the idyllic place nostalgically described by one of its favorite sons; who immortalized its rural beauty before the solid waste were part of the scene.  Thanks to the team work of the taskforce created by RCAP and the community support Collores is changing for good; the empowerment of the community is taking place in the solid waste management and we are convinced of the success of or approach.