Broad Top Township is located in rural northern Bedford County, Pennsylvania. Much of the township has a rugged topography, befitting its site in the Appalachian Mountains. It has a current population (2020 estimate) of about 1500. For many decades, the area thrived on the coal mining industry (with mining on the “Broad Top”), which still exists in limited form today. The Township is now primarily a bedroom community for larger, local municipalities, and has a high percentage of retirees. It is also the site of a regional landfill serving multiple counties.

The on-lot disposal of wastewater is difficult throughout the mountainous regions of Pennsylvania. Severe slopes and thin soils limit the options for traditional on-lot treatment. Prior to current environmental regulations, it was common for wastewater to be discharged directly to local streams, with no management. This was the situation faced by the Broad Top Township supervisors in the 1980s

Late in the decade, the Township took a bold and innovative approach to solving its problems with on-lot sewage treatment. Working in partnership with RCAP Solutions Technical Assistance Providers, the Township began to prepare an official planning document (Act 537 Plan) to address sewage planning on a township-wide basis. The final Plan had features that were- and perhaps still are – unique in the Commonwealth, even after 30 years. The central theme was that residents who became connected to conventional treatment facilities, along with those who allowed the Township to own and operate on-lot systems on private properties, would all be charged an equal monthly “sewage bill.” After receiving significant grant funding at the federal level, the township-wide system began operation in the 1990s. The initial monthly fee of $10 has slowly increased to only $22/month. There are currently 27 small flow treatment facilities and 49 sand mounds serving 97 residences along with a larger centralized wastewater facility.

RCAP Solutions has continued its involvement in the Township since it began nearly 35 years ago. Beginning in 1991, significant technical assistance was provided to the Defiance Water Company, which serves residents in the unincorporated village of Defiance. Similar assistance was provided for decades to the Coaldale Area Water Company, which has a customer base in the Borough of Coaldale as well as the Township.

The Township’s efforts to successfully manage wastewater treatment have been substantial and it has numerous physical assets. The need for an accurate system map became apparent by 2020. RCAP is now providing GIS mapping of the wastewater system, which wll be completed in 2022. It is expected that the mapping will include over 1100 discrete data points. The GIS data will be made available to the Bedford County Planning Commission, where it can be stored for future updates and modifications. 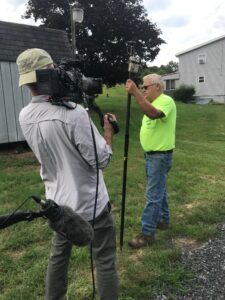 More recently, the Broad Top Township Board of Supervisors have been interviewed by a Health and Human Services (HHS) film crew to tell the story of the region. We will be excited to share the video when it is released.

According to the County Planning Director, Donald Schwartz, “We value the partnership that has been forged between Bedford County and RCAP. The relationship goes back for more than three decades, and RCAP has always been there for us, in numerous municipalities. Our rural townships and boroughs appreciate everything that RCAP has done to keep their drinking water and wastewater systems safe and financially viable. I can’t think of a better investment of federal tax dollars in our county.”

This article is dedicated to the early leaders in Broad Top Township who forged ahead with a bold wastewater plan- Jack Decker, Bernard Hoffnar, Ernest Fuller, Dave Thomas, and Donald Hedge and all of the men and women who have served the Broad Top region. Thank you for your efforts to clean and improve the water and land of Broad Top! To all the current staff of Broad Top Township, thank you for your considerable efforts to introduce senior housing to the area, to solve AMD (Abandoned Mine Drainage) issues and to extend utility services to neighboring communities.