Manzanillo is a small, poor, rural barrio located on the southern coast of Puerto Rico, where the Jacaguas River meets the Caribbean Sea. Manzanillo, like much of Puerto Rico, faces significant challenges with solidwaste management and illegal dumping, but for Manzanillo the problem is magnified because the debris is washed into the river and ocean only to be returned to the beach and into the community during the all too common flood events in the area. That continuous cycle of pollution, combined with the limited budgets and personnel, made the goal of cleanup seem almost out of reach. Recognizing the need for a comprehensive solution, RCAP Solutions partnered with the Solid Waste Authority of Puerto Rico and the Puerto Rico Department of Natural Resources to form a community coalition with the goal of cleaning up Manzanillo. 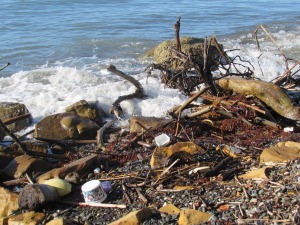 An example of the waste dumped along the beach.

The initiative attracted a wide range of participants, including the state and local police, local government officials, students from the University of Puerto Rico in Ponce, high school students, teachers, Boy Scout and Cub Scout troops, church groups, and a number of other people concerned with the condition of the neighborhood and its beaches.

In total, over 400 volunteers took part in the event, which took place in January, 2015 and which resulted in 15 truckloads of trash – approximately 100 cubic yards – hauled away.

“The cleanup was an inspiring event for me,” said RCAP Solutions Sustainable Materials Management Specialist Edwin Vázquez-Asencio, “We proved the importance of providing assistance to the communities that are in need, coordinating with local institutions, government agencies, municipalities, the state, and hundreds of volunteers who lined up when needed. We provided the motivation for members of the community to see a new way of thinking about their future, clean and simple. We have a problem with improper disposal of solid waste, and now we are looking for practical and sustainable ways to deal with it.” 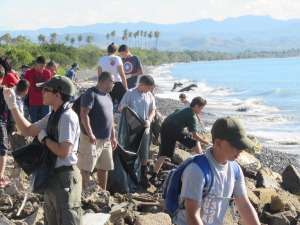 Large numbers of volunteers working along the rocky coast.

Edwin and his RCAP Solutions staff trained volunteers on how to handle waste and hazardous materials. Participants were given gloves, bags, and tracking sheets to map the volume, type, and location of the waste materials. The volunteers were also provided with educational information on recycling, water and wildlife conservation, and illegal dumping and burning.

The residents of the area not only gave their time, but also donated prepared snacks, drinks, and home cooked meals to volunteers throughout the course of the cleanup. Following the event, state police officers dressed in clown costumes, set up bounce houses, and provided face painting and other entertainment for the local children.

Adrian Alicea, a Park Ranger for the Department of Natural Resources, said, “This is exactly what we need, getting people to work together to protect the environment for future generations. This is part of our legacy for them and I’m glad we are a part of it. We patrol the area, try to educate people and prevent illegal dumping, but we need help. We really appreciate RCAP’s initiative to organize and coordinate this event. We need to continue this effort in other places.”

“I have a three year old girl and an eight year old son,” said Manzanillo resident, Jayline Olivencia. “When they see people like RCAP Solutions working with us, they will grow up knowing that if we work together, we can get the help we need to have a better life in our community. My son helped clean the river with his dad. It will help the next generation think differently about the community and the environment.” 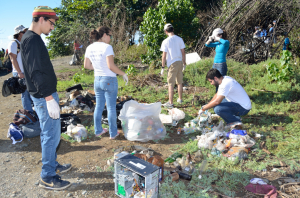 Volunteers fill trash bags during the clean up.

Following up on the success of the event, in March, RCAP Solutions offered a workshop focused on the creative re-use of recyclable and found objects, such as repurposing plastic containers were as pots for vegetables and using toilet paper and paper towel rolls as seed pots for plants in community gardens. School children and their parents raised the plants with their parents, and the plants were targeted for use in the restoration of the problem areas.

Additional support was provided by Keila Rivera, an environmental science graduate student from the Pontifical Catholic University of Puerto Rico, who assisted with the workshops and researched information about the garbage burning habits promoted in Manzanillo Community. She said, “With this effort, we can say, today we made the change! RCAP Solutions was a helping hand, uniting people and creating an understanding about the importance of protecting and maintaining a clean environment, which will lead to a better quality of life and a better future.”

RCAP Solutions is continuing to research additional strategies that will add value to the areas that were cleaned and recovered from illegal dumping. These include the creation of a land adoption program, where local businesses and community groups take ownership of the landscaping and continued maintenance of public area. 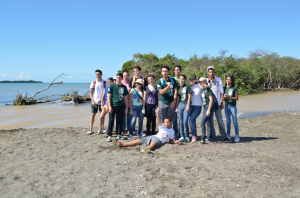 Cleaning an area like Manzanillo is a just a first step toward solving the significant solid waste issue in Puerto Rico. According to the U.S. Environmental Protection Agency (EPA), the problem has reached crisis levels. The island generates more waste per person than the mainland and anywhere else in the Caribbean.

Although 55% of Puerto Rico’s waste stream is considered recyclable, current recycling rates are between 7-10%, well below the island’s official goal of 35%, and largely limited to urban areas. There are very few drop-off locations, which makes recycling, even for the highly motivated, quite difficult. There is also no “bottle bill” in Puerto Rico. Illegal dumping is common, and littering is endemic.

Most of the landfills on the island are non-compliant. Most rural communities have “transfer sites” which consist of unenclosed dumpsters located on the dirt shoulders of major roads. These sites allow leachates into the aquifers and major rivers that run parallel to the roads and serve as water sources for downstream communities.

Trucks are loaded withn trash, to be hauled away.

Large items, such as tires and refrigerators, act as reservoirs for rainwater and provide a breeding ground for disease vectors like mosquitoes and rats. An outbreak of Dengue Hemorrhagic Fever in 1994 and 1995, resulting in 4,660 hospitalizations and 40 deaths, was largely attributed poor waste management practices, insufficient infrastructure, illegal dumping, and polluted cisterns.

More recently, Chikungunya, a mosquito transmitted disease causing fever and intense joint pain, has been spreading throughout the Caribbean. The virus alone is seldom fatal, but the symptoms can be severe and disabling. Chikungunya is common in Africa, the Indian subcontinent, and Southeast Asia, but recent outbreaks have spread the disease over a wider range. In December 2013, Chikungunya was confirmed on the Caribbean island of St. Martin, and as of October 2014 there have been 18,109 suspected cases of Chikungunya in Puerto Rico, according to the Puerto Rico Department of Health.

Puerto Rico also faces numerous barriers that make it difficult for communities and the government to implement solid waste reduction initiatives. These include a lack of infrastructure, economics, startup costs, cultural issues, and a lack of capacity. 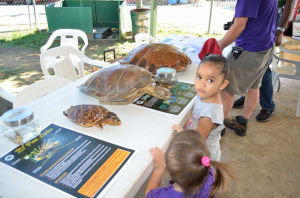 The youngest members of the community learn about water and wildlife conservation.

From an economic perspective, low income rural communities do not have the resources to experiment with solid waste reduction systems, and most citizens see municipal solid waste services as a “free service.” There is little utilization of unit-based pricing to incentivize waste reduction/recycling and the infrastructure is not yet in place to provide for these types of systems.

The only current economic mechanisms in place that could incentivize citizens to recycle are the tipping fees at the landfills. However, the fees across the island are low and do not reflect the true cost of landfill disposal. In Puerto Rico, tipping fees average $30/ton, whereas in the Northeastern part of the United States tipping fees average over $70/ton. Also, many believe that increasing tipping fees and initiating unit-based pricing schemes will result in an increase in illegal dumping.

The only other economic incentives for communities are noncompliance fees. However, most communities, if fined, do not have any means of paying the fines. In lieu of payment, the EPA has instead been requiring communities to develop and implement improvement plans.

These communities have limited technical staff available for waste reduction, as well as for operator training, and there is a significant level of need to increase the technical assistance capacity. There is a significant need to provide training and technical assistance for planning, financing, managing, and conducting the community education necessary to develop and operate a successful waste reduction program. 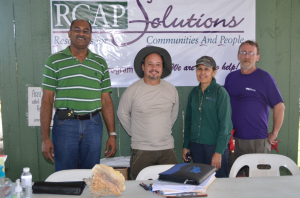 RCAP Solutions has stepped in to try to address many of these issues with a grant from USDA Rural Development that began in October of 2014. Specifically, the goals are to promote reduction, re-use, and recycling through community recycling programs; plan and implement waste reduction programming; promote the elimination/reduction of illegal dumping sites; and promote collaborative and regionalized approaches that can help address cost barriers and achieve economies of scale in solid waste reduction efforts.

According to Josefa Torres, RCAP Solutions District Director for Puerto Rico and the United States Virgin Islands, “There are many ways to solve the solid waste problem in Puerto Rico with the 3R’s: Reduce, Reuse and Recycle. However, I strongly believe the educational component is necessary for the achievement and success of this important initiative.”

While Puerto Rico faces a daunting task in tackling its solid waste issues, the problem must be met at the community level. Manzanillo was an example of what can be done when a community has the leadership and cooperation needed to succeed.

“Manzanillo’ s experience was an example of solidarity and empowerment,” said Dr. Sandra Moyá of the University of Puerto Rico’s Department of Biology, “a reflection on what each one can do for the collective, and a successful learning experience for both the local community and the volunteers involved.”