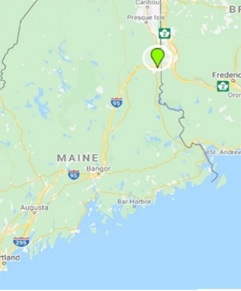 The Houlton Water Company’s two pump stations that serve the Houlton Band of Maliseet Indians need to be upgraded. Approximately twenty new connections have been added to the system — which is taxing the current design capacity. The lift station pumps have been failing before the expected end of life. Overflows at the lift stations have been documented as a public health hazard. These failures are also creating an increase in operational costs to maintain the system. Houlton Water Company and the Houlton Band of Maliseet Indians needed to secure an engineer and develop a funding mechanism plan to upgrade the system to eliminate overflow events and increase capacity for the rising population on the reservation.

THE CHALLENGE
There were many nuanced challenges to overcome to be able to apply and access project funding. The first major hurdle was that Houlton Water Company owns all sewer system components that service the tribal land which led to the concern that it may be necessary to transfer ownership to the Houlton Band of Maliseet in order to access set aside funds for Native Americans. The next challenge was to verify that the project was going to alleviate a public health hazard. Extensive documentation was needed to show the impact of overflow events to the tribe. Lastly, the project needed to be structured so that federal funding was not intertwined and it lined up appropriately to enable a full funding package.

“I am very glad that the RCAP Program is present and available to provide this technical assistance free of charge. The program has already made a big impact and we all look forward to many years of involvement with RCAP and service to the Maine Tribes.”
CDR Kenneth J. Grant, PE, Bangor Field Office, Nashville Area, Indian Health Service

THE APPROACH & SOLUTION
Although both Houlton Water Company and the Houlton Band of Maliseet Indians were willing to return ownership of the sewer components back to the tribe if necessary, RCAP advocated for the wastewater infrastructure to remain under Houlton Water Company’s ownership. The relationship between the two entities was very cooperative and the system was well-managed under the current structure. Changing ownership would only be an undue burden. The funding agencies all agreed.

Sufficient documentation and explanation of the events, as well as action taken by Houlton Water Company regarding overflow of untreated wastewater, was then provided to the Department of Environmental Protection (DEP). The DEP formally concurred with the concern that the pump stations needed upgrades to protect the environment and public health of this area. This confirmation was a vital part to be able to access Indian Setback funds from both Indian Health Services and USDA.

RCAP then prepared a request for proposals to retain engineering services. Once the engineer was on board, RCAP coordinated a kick-off meeting to begin the design phase of the project. After the preliminary engineering report (PER) and environmental review were finalized and approved, RCAP stepped back into the mix to help finalize the USDA loan application and public meetings. Indian Health Service (IHS) utilized the PER to aid in their attempt to secure IHS funding for a related but separate project, which primarily dealt operation and maintenance element of the designed product. Finally, the project team applied to the DEP Clean Water State Revolving Fund (CWSRF).

THE IMPACT
The project was initially waitlisted for CWSRF but, in August of 2021, thanks to the availability of funds through the American Rescue Plan Act of 2021 (ARPA), the project was awarded with $1M of American Recovery Grant Funds. In February of 2022, USDA reached out to the project group with the exciting news that the project was approved for $1.1M in Indian Set Aside Funds. It is believed that the project is well positioned to be able to access funds from the EPA Clean Water Act (Tribal Set-Aside) totaling $977K for FY 2022. In total, the project is anticipated to receive $3.057M in grant funds to ensure that the public health hazard is eliminated for the Houlton Band of Maliseet Indians.

RCAP’s involvement in this project has been over two years in development. Through planning, persistence, patience and teamwork, this project group was able to overcome many obstacles to be awarded the best outcome possible for Houlton Water Company and the Houlton Band of Maliseet Indians lift station project. The project team anticipates being able to complete construction in 2022.