The East Branch water system has been under a Boil Water order from the health department for almost three years. A recently-completed Preliminary Engineering Report suggested that without outside funding assistance, a project to resolve the problem would cost residents upwards of $900 per year per household. 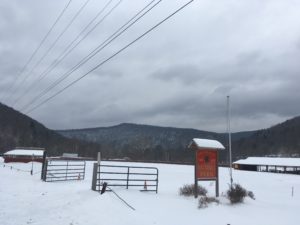 The Town of Hancock is proposing to take over the water system and provide a new well source; ultimately, they also plan to upgrade the aging distribution system. RCAP Solutions completed an income survey to document income eligibility of the service area to compete for a Community Development Block Grant (CDBG) to pay for the improvements; the system was deemed eligible and the application was funded

The private water company serving 42 homes in the hamlet of East Branch in the Town of Hancock, located in Delaware County, is fed by two deep, low-producing wells and by springs that have been determined to be groundwater under the direct influence of surface water (GWUDI). The system’s infrastructure is also aging, and the Water Board that has been running the system for many years was overwhelmed by the magnitude of the need to upgrade the system and bring it back into compliance. The Town of Hancock offered to take over the water system and commissioned an engineering study to evaluate alternatives and estimated costs. However, the cost of the suggested improvements was projected to triple the existing water rates. On the other hand, having the Town take over the system enabled East Branch to be eligible to compete for CDBG funds to pay for the much-needed upgrade. In order to document financial need, RCAP Solutions assisted the Town to document the % Low-to-Moderate Income (LMI) Individuals in the service area through the completion of an income survey.

RCAP Solutions helped the Town to initiate the survey by providing the survey form, a sample cover letter, and survey instructions. RCAP received the completed surveys, processed the data in a specialized database, provided periodic updates, and assisted the Town to achieve the required 95% return rate through follow-up door-to-door canvassing. The survey documented that the percentage of residents served by the system exceeded 51.0% LMI Individuals, the minimum needed to be eligible to compete for CDBG funds. The survey documented that fully 64.8% of the residents were considered low-to-moderate income. RCAP provided the Town with the survey results as well as the methodology and supporting documentation for the CDBG application.

In December 2017, it was announced that the NYS Office of Community Renewal awarded the project $595,500 in CDBG funds. More than two thirds of the project costs are associated with providing the 3,000-foot service line from the site of the new well to the existing system. The Town plans to use the income survey results to support a second CDBG application this year in order to fully replace the distribution system as well. This valuable grant funding will help to keep rates reasonable for this lower income community instead of paying over $900 a year per household, which would have been the case if they had to pay 100% out of pocket for the needed upgrades and interconnection. The project, once complete, will also allow the Boil Water Order to be lifted, so residents will have water in compliance with the Safe Drinking Water Act flowing from their taps for the first time in nearly three years.