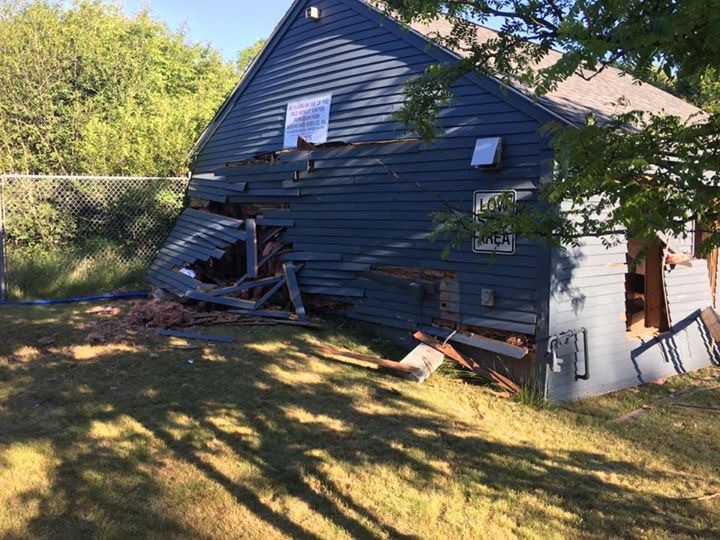 Located in the Northeast Massachusetts Town of Boxford and developed in 1994, the Andrews Farm residential community was the first community built under Massachusetts’s Chapter 40B law. This law requires that a minimum of 25% of the community has an income at 80% or below the area median income.

On the request of USDA’s Rural Development Office (RD), RCAP Solutions met with the community and worked with them to develop an asset management plan using US EPA’s Check up Program for Small Systems (CUPSS). With that asset and capital improvement information and then calculating the depreciation of assets, RCAP performed a system value evaluation which has been accepted by RD to facilitate a future sale of the system.

At this point in the project the focus shifted from assisting the water system through a sale to an emergency situation when on June 17, 2016 at 5:30 pm the community’s 3,000-gallon pneumatic drinking water storage tank exploded. The explosion destroyed much of the water system’s infrastructure including its pump house, and the incident left 53 homes without running water. I was at home watching the local evening news that night and saw the breaking news come in live.

Fox 25 Boston news reported that Brandon Shaw, a visitor to the community that day said: “All of a sudden there was a huge bang, the ground shook, and I heard all the glass shattering…I was walking thirty feet away; if I was a couple minutes later I would’ve been right in front of it.” The contract water operator for the community had been in the pump house less than an hour prior to the explosion but thankfully he has already left. No one else was injured.

Following a joint investigation by the Massachusetts State Fire Marshall Office and Boxford Fire Department, it was determined the cause to be a failure of the tank due to an increase in water or air pressure. “The pressure caused the tank to rupture, which sent a tremendous amount of energy that caused the damage,” reported the Massachusetts State Fire Marshall Office. “The building has been deemed a loss and is off limits to unauthorized persons.”

Fortunately, Andrews Farm had an emergency connection with a neighboring community that was utilized within 20 hours of the incident, restoring water flow to the residents. A few days later, after water sampling proved the water was potable, it was cleared for eating and drinking. The quick response was a testament to the need to have an updated emergency response plan which is exercised and updated frequently as well as a backup water supply within or outside of your own system

The incident was so dramatic it resulted in the Massachusetts Department of Environmental Protection’s (MASS DEP) Drinking Water Program to remind all water systems in the Commonwealth to inspect their storage tanks every 5 years, as required, especially pneumatic storage tanks. In that memo MASSDEP reminded systems to follow manufacturer guidance on useful life as structural integrity may be compromised after that. They also mentioned that a very similar incident occurred in June 2015 in North Stonington, CT.

An RCAP Solutions Specialist immediately was in contact with the owner to provide technical assistance and guidance to get the process of repairing the system started, which included many obstacles that had to be overcome during the process. An immediate concern was finding $100,000 to re-build the water system and to winterize the emergency connection which at the time was located above ground. The insurance company for the water system concluded that the cause of the damage to the water system was excluded from coverage, a conclusion the water system did and continues to dispute as they had just had their storage tanks inspected 11 months prior to the incident by a reputable outside contractor who did not note any deficiencies.

The water system had $1.6 million in coverage prior to the incident but in total they only received $128,000 in insurance funds to winterize the emergency connection and rebuild the pump house. This led the water company to seek out other sources of funding to re-build the system.

The water company is privately owned and prior to the emergency was preparing to be sold to prospective buyers including the neighborhood residents themselves if a cooperative was formed. Being a privately owned for-profit water company, the funding options were limited but many were explored with RCAP Solutions’ assistance including a submitted application to our RCAP network partner organization, Communities Unlimited (CU). They have a Revolving Loan Fund, but their loan terms could not be met by the water company, so the system ownership ended up supplying the needed capital to re-build the system which in total was approximately $240,000 above and beyond the emergency connection winterization costs.

RCAP Solutions’ assistance also included technical assistance throughout the construction planning and design stage. The usual process of selecting an engineer, applying for public agency permits etc. were accomplished but additional unusual obstacles were met throughout.

These obstacles included an order from the neighboring water system which acting as the emergency water source, for Andrew’s Farm to re-build their system and be self-sufficient by July 1, 2017 as they were no longer going to provide water to the water company after that date or serve as an emergency back-up supply again. This greatly increased the urgency to re-build as soon as possible and brought about the need for extra water storage for emergencies since this emergency connection would no longer be viable. This decision was ultimately reversed by the neighboring water system’s board and today they continue to serve as an emergency backup source to Andrew’s Farm.

Another obstacle was the FEMA flood maps. The maps showed the original pump house which had been destroyed as being in a flood plain, but this seemed to be an error because areas downgrade from the pump house even were not in a flood plain. This limited the water company’s ability to build beyond the original footprint under local building codes. With innovative design by the water company’s engineer, this obstacle was successfully overcome.

A third obstacle was the water company’s ability to raise user rates to pay for repairs to the water system. Rate setting for this community is regulated by the Massachusetts Department of Public Utilities (DPU) and a public hearing was required before DPU’s Board for this request. A decision on the rate adjustment request of the water company is still forthcoming from the DPU and should have a final decision in the fall.

Despite the obstacles faced, on June 21, 2017, exactly 1 year and 4 days from the tank rupture that destroyed the pump house, the newly re-built pump house, storage and control center was put online and features some significant upgrades and technological advances.

The new control panel is the newest electronic technology allowing for remote Wi-Fi connect-ability and control by the system’s owner and contract operator. Also, the building’s side walls were made to be removable to allow storage tank replacement without significant structural alteration.

The extremely quick re-building effort was first and foremost the result of a tenacious owner of the water company, Doug Conn, whose background as a builder served invaluable in the effort. Also, the work of the water company’s engineer and MASS DEP’s involvement and prioritization ensured the project could move along expeditiously.

RCAP Solutions continues to assist the water company to prepare for an ultimate sale and look for entities that may want to buy the water system including the citizens of the neighborhood. RCAP Solutions has spoken with community members and has offered our technical assistance to them if they wish to pursue the creation of a cooperative to take ownership of the water system.