It’s late in the evening, and the monthly meeting of the Prudential Committee has been over for hours. Lisa Bowden, treasurer and clerk of the Barnet Fire District #2, is tired and frustrated. She should have been home hours ago, but an issue with the chlorine pump at the well pumphouse is keeping her awake. Lisa is used to sending out bills, balancing the District’s too-thin checkbook, and chasing customers down for delinquent payments; replacing the diaphragm on a chemical feed pump is not in her proverbial toolkit. Unfortunately, there doesn’t seem to be a new pump diaphragm in her actual toolkit, either. 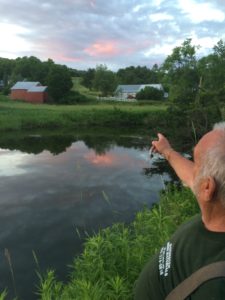 A board member points out where a critical water main crosses a river in the village. The pipe has been undermined due to erosion from recent flooding and has become a source of concern for the community.

RCAP Solutions had attended the meeting out of concern that two of the three Prudential Committee members of Barnet Fire District #2 (BFD2), a special district that manages the water system, sidewalks, and the few streetlights in the tiny Vermont village, had thoughts of stepping down. Having worked with the community years before, RCAP Solutions stayed in touch with the system and knew that it was a critical time for the village. Volunteering to attend meetings, make difficult financial decisions, and mind the day to day operation of the water system seemed to be getting old for members of the Prudential Committee. Not the only thing getting old, as Lisa pointed out. “I’d hate to look at the average age in this village,” she said during a recent meeting. “We’re not getting any younger.”

In a village of a few hundred people – the system has just 61 connections – finding the right people to lead the Fire District and figure out how to fund critical infrastructure improvements wasn’t necessarily the issue. The issue was finding anyone at all. Fortunately for the village, they may have finally found the right people. For months, Lisa had pleaded for residents to attend meetings and to get involved with the water system in her regular emails to customers. And there were plenty of emails, because Lisa religiously kept customers up to date on the latest in a long string of water main breaks, boil water advisories, and water usage restrictions. Then, a resident who lives a few doors down from the pumphouse, Jon Carpenter, decided that he’d be willing to step into the role of Chairperson for the Prudential Committee. David Stevenson, a holdover from the previous Committee, agreed to be trained to help monitor the system and record chlorine residuals under the tutelage of the system’s certified water operator. Jay Sprout, a resident and pastor at a local church, decided that he’d be willing to add his voice to the three-person governing body.

Despite recent source water and treatment plant improvements made by BFD2, maintaining regulatory compliance is a real challenge – as it is for many rural communities. The water system, which serves about 205 customers, had been under a boil-water advisory since 2004 due to long-term source water deficiencies. In 2014 members of the community expressed a desire to acquire the system from its private owner, and RCAP Solutions facilitated several steps in the process. The goal of the purchase was to give the community more control over the fate of its water system. As a publicly owned water system, BFD2 would now be able to access federal funding sources for long overdue improvements.

In February of 2017, BFD2 completed a major source water improvement project, financed in part by the Drinking Water State Revolving Loan Fund. This should have marked an important milestone for the community, as they were able to lift the boil water advisory following the improvements and installation of a new disinfection process. It was not the end of infrastructure concerns, however; frequent distribution system failures were crippling the system’s operating budget. Well pumps work overtime, the chlorine supply dwindles, and another tab is opened with the local contractor to start digging. Replacing a few feet of pipe at a time is unsustainable, and the Prudential Committee knows it. The contractor, who has enabled BFD2 to continue providing pressurized, potable water by allowing BFD2 to pay when they can – knows it. Maybe most importantly, the customers are beginning to realize that a long-term solution is needed.

To address the issues in the distribution system, RCAP Solutions provided an action plan to the board. The plan calls for taking advantage of available state resources, such as an asset management grant, to better plan for future needs. In the process, BFD2 could prioritize distribution system improvements – including the replacement of a critical, aging water main crossing a river in the village. Meanwhile, the Prudential Committee is taking advantage of grant-funded leak detection services and is working with RCAP Solutions to increase revenue. In addition to securing a rate adjustment and looking at available planning grants, though, they will need to work on another critical task – gaining the support and trust of the community. For a system this size, taking on more debt – which requires community support in the form of a bond vote – will be a likely scenario considering the lack of reserves and mounting infrastructure concerns. For BFD2, it is the financially prudent approach; annual repairs are comparable to, and occasionally more than, another bond payment. With interest rates on the rise, a project that is “necessary and inevitable”, in the words of a local USDA representative, can’t be started soon enough.

For the Prudential Committee, it is more important than ever that they build on the achievements of the source water improvement project. Unfortunately, operational issues with the new 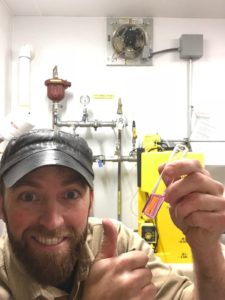 chlorination system, coupled with the lack of local capacity for diagnosing and resolving those issues, contributed to a violation in late 2017 for failing to maintain adequate microbial treatment. Under the Groundwater Rule, the system is required to maintain a minimum chlorine residual to ensure adequate disinfection. Avoiding an additional violation would be critical; every violation or misstep for the Prudential Committee – especially one that results in another boil-water advisory- reduces the likelihood that they will be able to gain the community’s trust. Without the trust of the customers, it’s unlikely that they will move ahead with the bond vote necessary for future improvements.

Scanning the shelves of the Fire District’s pumphouse, Lisa and RCAP Solutions TAP, Mark Johnson, finally found a rebuild kit that would work for a backup pump. The chlorine residual was re-established, a violation avoided, and Lisa had received her first lesson on rebuilding a chemical metering pump. In the weeks that followed, RCAP Solutions provided practical guidance to the system’s operator and treatment plant engineer on how to improve the chemical feed system. RCAP Solutions has also provided the system’s board members with the knowledge they need to maintain compliance with state and federal regulations.

A former dairy farmer, Jon Carpenter, has brought his dedication and work ethic to help solve some of the Fire District’s most pressing issues. David Stevenson’s watchful eyes have kept the Prudential Committee from having to request a site visit from the certified water operator every time a minor issue pops up, which is helpful. Even though the operator keeps close tabs on the system, she lives over an hour away and BFD2 can’t pay for too many emergency visits. Jay Sprout’s common-sense approach to system management has already started to pay dividends; meetings are run efficiently, and discussion stays on topic.

Lisa Bowden, on the other hand, continues to claim that she’s ready for a break from her duties. Whether it’s trudging up to the storage tank in a snowstorm, communicating critical details about the system to customers, performing her duties as tax collector, or trying to act interested in the intricacies of pump diaphragms, for years Lisa has been a passionate advocate for the village. But Lisa can’t do it much longer. Nor does she want to, as she tells anyone who will listen. “I’m too old for this stuff,” she pointed out as she locked up the pumphouse, ready for a vacation that is long overdue.