During April 2014, the Federal Reserve Bank of Boston conducted its semiannual New England Community Outlook Survey. The survey covered topics ranging from the availability of credit for small businesses to emerging issues facing lower-income communities; this time the survey also included three questions specific to issues affecting suburban lower-income communities. Â New Englandâ€™s population is split between rural areas, small metropolitan areas, urban centers, and suburban areas surrounding the urban centers. In the past, due to the urban bias of respondents, many New England Community Outlook Survey reports focused on the lower- and moderate-income urban experience. In January 2014, the survey was revised somewhat to shed light on the challenges facing New Englandâ€™s rural communities, and this report focuses on low- and moderate-income households that till now havenâ€™t been widely acknowledged as living within New Englandâ€™s suburban communities. Â 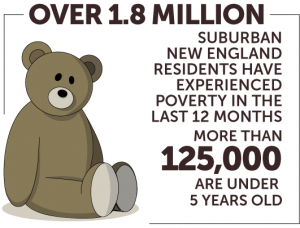 All too often, low- and moderate-income (LMI) families live in suburban neighborhoods that are replete with wealth but devoid of the social service networks available to urban families in need.Â Â Â  This New England Community Outlook Survey Report tries to shine light on the challenges they face, with a particular focus on Connecticut.

With much of its population dispersed among the largest cities, Connecticut presented a unique opportunity to examine a largely suburban state with a relatively high median family income, in which many lower-income families seemingly â€œare lost in the suburbs.â€Â  We looked at two specific metropolitan areas in Connecticut â€“ Hartford and New Haven â€“ where lower-income suburban families are struggling to cope with the high cost of affordable child care and making sacrifices to pay for the daily commute to work, both of which pose a risk to household financial stability.Â  It is worth noting, however, that the challenges described could apply to any suburban neighborhood in New England.

We encourage you to review the Report and share it with those who might have an interest.