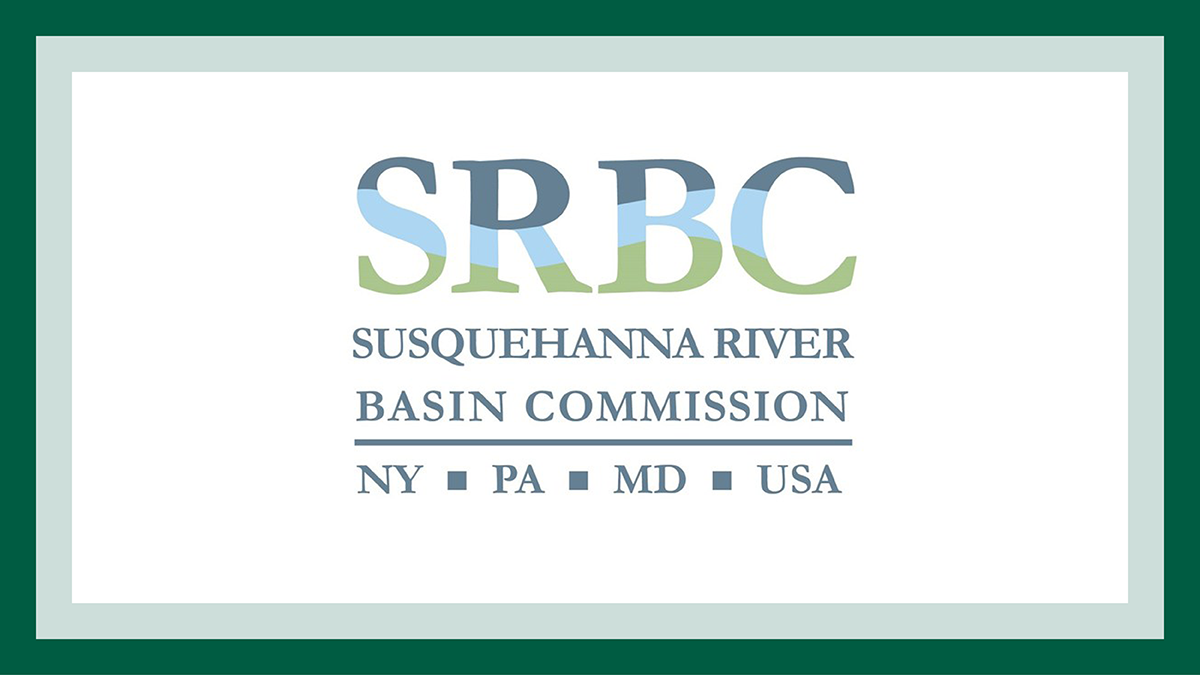 RCAP Solutions is pleased to have been awarded a $454,522 grant from the Susquehanna River Basin Commission!

This funding will be used to provide technical assistance and training to small water utilities in Centre County, #Pennsylvania on water auditing and leakage prevention. Utilities will learn water loss techniques, helping them conserve large volumes of water, enabling them to be more financially resilient and environmentally sustainable.

Last year was a challenging time for RCAP Solutions. Like so many other non-profit organizations, we continued to see the numerous impacts of the ongoing global pandemic in underserved populations, and we resolved to face these difficulties head-on. View our 2021 Impact Report to learn more about last year’s accomplishments and read stories from the people we serve!

We thank our partners and continued supporters and invite you to join us as we engage our communities in the realization of a collective vision, creating and implementing a plan to guide them to self-actualized and sustained success.

We look forward to a productive 2022 as we remain steadfast in our commitment to fulfilling our mission: To foster personal and public self-reliance and improve the quality of life for individuals, families, and the communities in which they live. 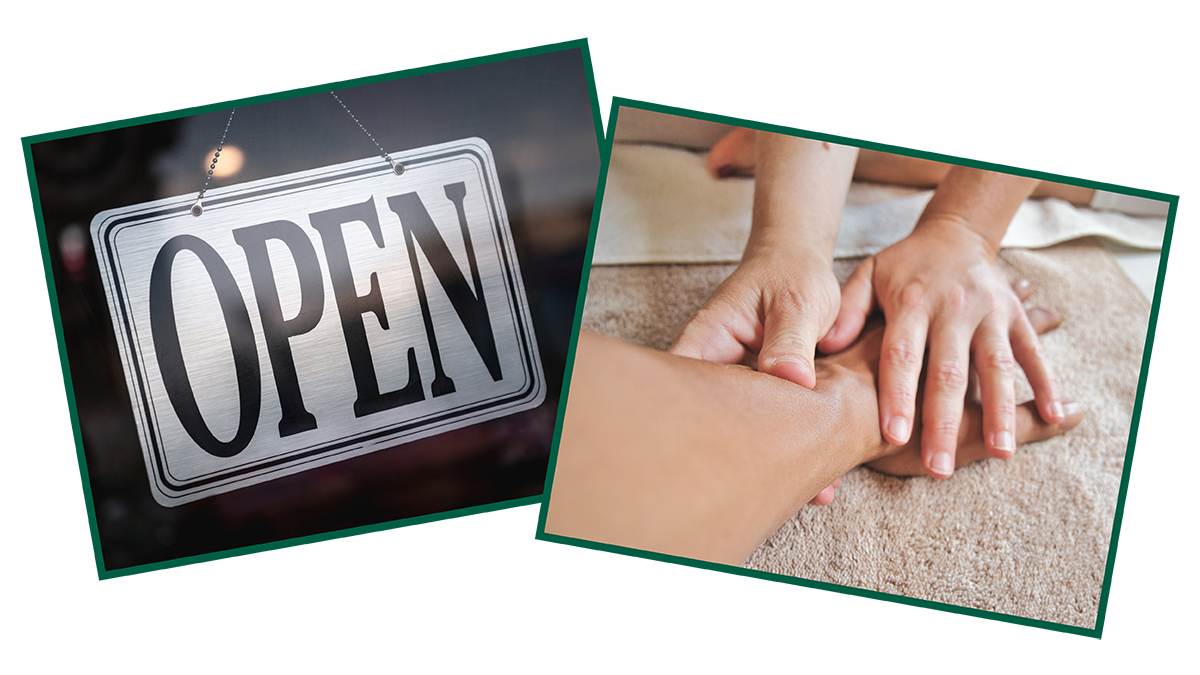 Background: Jimmy Kakouris is a trained physical therapist from Boylston, Massachusetts. After years of experience in the field, Mr. Kakouris decided to open his own physical therapy practice, Ethos Rehabilitation. He approached Workers’ Credit Union – a partner in RCAP’s Open for Business Program – for start-up financing, but the business loan officers at the credit union did not have confidence in his plan. Instead of simply denying Mr. Kakouris financing, they referred him to RCAP to refine his business model.

The Challenge: Rural communities across the United States share a sense of underdeveloped entrepreneurial capacity. Lack of educational opportunities, poor connectivity infrastructure and a general absence of human capital capable of providing mentorship and expertise in the community all contribute to the high business failure rate in our nations small towns and villages. RCAP is striving to surmount these obstacles by delivering the absent human capital to rural communities in a cost-effective manner. In meeting this challenge, RCAP is building permanent entrepreneurial capacity in rural America.

The Approach & Solution: To rise to the challenge, RCAP launched the Open for Business program. The program delivers business expertise to rural communities through webinars, online workshops and one-on-one business consultations made available to entrepreneurs at no cost. All services are delivered remotely to reduce cost and maximize geographic reach. Jimmy Kakouris utilized this program to receive free guidance from RCAP’s experienced consultants. The RCAP consulting team worked with Mr. Kakouris to develop his business plan and financial projections to model his path to success. At the time of this writing, Mr. Kakouris received twenty-two hours of one-on-one consulting assistance.

Today, Mr. Kakouris has a business plan that will provide a return on his investment, a budget for leased space that is appropriate for the Boylston, Massachusetts area, data-driven projections for his lenders and a professional marketing strategy – all of which cost him nothing but his time. If not for RCAP’s Open for Business Program, Mr. Kakouris would have never received financing, or worse, taken on debt for a plan that would have only succeeded in bankrupting him. In the case of Jimmy Kakouris and many other entrepreneurs around the country, bringing human capital to bear meant the difference between failure and success.

A single parent, Tania had been living in a subsidized housing apartment for several years when she heard about the Family Self-Sufficiency (FSS) Program from a friend. In 2016, when she first enrolled in the program, Tania used a wheelchair due to a rare inflammation in her back and knees, but that did not hinder her ambition.

A self-proclaimed “go-getter”, Tania came into the program with very clear goals:

Coupled by the support provided by RCAP Solutions and her extreme drive to succeed, Tania not only met these goals – but exceeded them.

The FSS Program is a 5-year program which helps Section 8 Housing Choice Voucher holders and Project-Based Voucher recipients to achieve economic stability. Program participants receive a financial incentive of an escrow account in their name that they will have access to after graduating the program. In addition, program participants work with a dedicated case manager to set milestones and achieve several goals which result in increased financial independence.

Tania first had to fix her poor credit score, which she did by attending a Financial Capability workshop at RCAP Solutions. She was able to review her credit report and removed excess and unused accounts. She opened a new credit card account and learned to budget so that she could pay her bills when they were due.

No longer needing a wheelchair, and due to the success of her newfound financial freedom, Tania was able to purchase a new car. She attended community college and graduated with a degree in accounting.

Tania’s employers at a home improvement retailer, impressed by her achievements at both work and in her personal life, promoted her twice since she began working there in 2017. Tania now serves as a district manager and oversees the installation of doors, windows, cabinets, and other miscellaneous home improvement projects for customers across the region.

In addition, Tania has been the recipient of several professional awards for her dedication and commitment to her co-workers, customers, and associates. Tania has taken on further professional development courses and enrolled in leadership skills training.

After spending so much time working in the home improvement business, Tania decided it was time for a home of her own. She enrolled in the First-Time Homebuyer Certification class at RCAP Solutions, which furthered her ability to finance the purchase and was connected to low-interest mortgage programs and down-payment assistance options.

Tania graduated from the FSS Program in August 2021 and is now a proud homeowner with over $15,000 in savings which she accrued during her 5 years in the program.

As for others considering enrolling in this program and becoming more financially independent, Tania says, “Anything is possible if you give it your all. If you put in the effort, everything will fall into place, and it will all get accomplished”.

Multiple Openings! No Experience Necessary – We Will Train You! 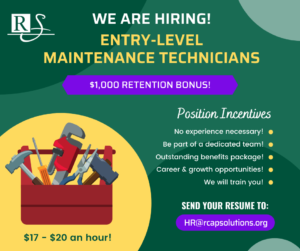 Do you enjoy working with people? Do you want a career where no two days are the same? RCAP Solutions is currently looking for full-time entry-level maintenance technicians to staff our apartment complexes across Central Massachusetts! We have openings at our Groton, Hubbardston, and Worcester locations.

No experience is necessary – we will train you! All you need is a team-player attitude and a desire to learn. However, if you like working with your hands or have a background as a janitor, painter, construction laborer, or landscaper – this may be the perfect opportunity to start a new career.

Be part of a hardworking, dedicated team and use your skills to help our senior and mobility impaired residents with their maintenance needs which play a crucial role in making their apartment feel like home.

RCAP Solutions offers an outstanding benefits package, including 14 paid holidays and your birthday off! Interested candidates should submit their resume and cover letter to HR@rcapsolutions.org.

Check out this testimonial from the Borough of Midland, Pennsylvania!

Our team in the Keystone State has been working this community to improve their water and sewer infrastructure through GIS mapping, application assistance for funding programs, and more.

Midland is a small, rural community located on the edge of western Pennsylvania. A former manufacturing giant, the borough has been attempting to drive small businesses back to the area in the wake of their steel mill’s closure, which once played a major part in Midland’s economy and workforce.

The consultant for the authority, Brigid Darbut, has been working with RCAP Solutions as well as several other community organizations and leaders to introduce revitalization efforts in the town, not only through improved water infrastructure, but through economic development, shared services, and more.

We have earned a 2021 GuideStar Gold Seal of Transparency! Learn more about our organization through our nonprofit profile, here.

By sharing our impact, strategies, and financials, we aim to be transparent about our efforts to support the power and potential of communities. 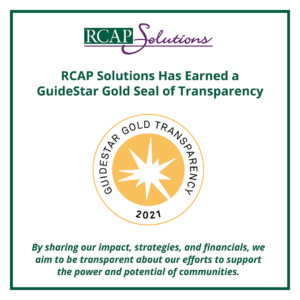 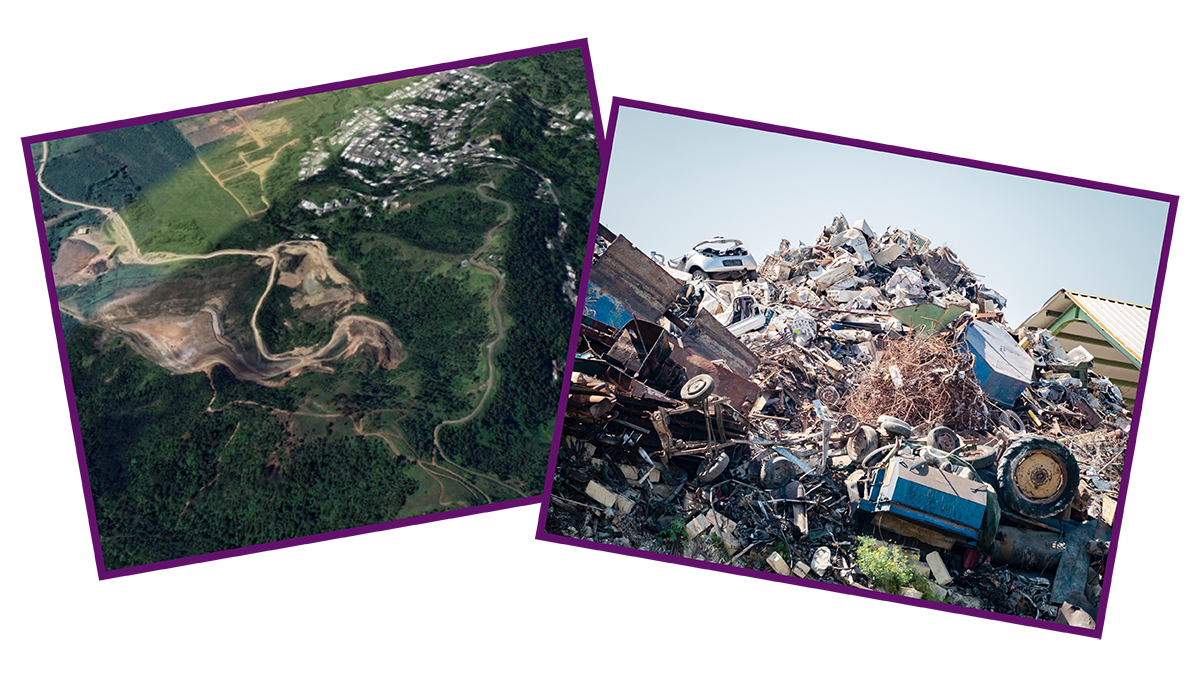 Juncos municipality is in the eastern central region of Puerto Rico. Juncos’ landfill receives approximately 35,105 tons of non-hazardous solid waste each year. In 2017, winds from Hurricane Maria destroyed the facility’s leachate collection system, creating a serious health and safety hazard for neighboring communities and was at risk of contaminating underground water resources and nearby streams. The storm’s effects also reduced the landfill’s capacity by 20% and severely reduced its predicted lifespan.

The main challenge was to define the project and determine how the municipality could finance the necessary repairs that were imperative to address this problem. Our goal was to protect the community’s health, assist them in achieving compliance, and support the transition of the facility into a sanitary landfill system. In addition, the community also needed to account for the capacity overflow due to the extraordinary amount of debris which the landfill received in the aftermath of the disaster.

The RCAP Solutions staff served as a fundamental liaison between the municipality, stakeholders, and USDA Rural Development as we assisted the municipality in achieving compliance. Our technical assistance provider coordinated and conducted a training about disaster assistance grant funding and guided them throughout the process, outlining key elements to completing a successful application for USDA funds.

USDA Rural Development awarded Juncos’ Municipality with $23.7 million in grant funding to repair its landfill facilities. The facilities will be expanded to achieve compliance, and in addition, the community’s health will no longer be at risk due to the damage caused by the hurricane.

RCAP Solutions has been awarded a $5,000 Organizational Development Grant from The Community Foundation of North Central Massachusetts. This funding will be used to implement a loan management software system and supplement our current financial programs.

Over the next year, we will pursue opportunities to enhance our lending services and aim to establish a revolving loan fund, supporting the Private Well Program to Protect Public Health, an initiative backed by The Health Foundation of Central Massachusetts.

There are currently no affordable financing options for homeowners needing repairs or maintenance on their private wells, preventing harmful contaminants from entering household water supplies. These funds will establish a baseline as we explore innovative solutions to combat these issues.

The Coral Bay Community Council (CBCC), a non-profit organization which helps communities in the U.S. Virgin Islands with environmental issues, recently released their 2021 Watershed Management Plan, a detailed 5-year outline for the future management of their stormwater and drinking water supply.

The plan is the result of over two years of work by Watershed Consulting Associates, CBCC, local residents, government agencies, and various other community development organizations.

In the wake of the destruction caused by Hurricanes Irma and Maria in 2017, and the challenges brought on by the COVID-19 pandemic, the residents of Coral Bay will benefit from this plan, which incorporates professional analysis and stakeholder input to create a shared vision to address threats to water quality in and around the area.

The full plan can be viewed bewlow or at www.coralbaycommunitycouncil.org, along with an accompanying shorter, “Community Handbook” version. 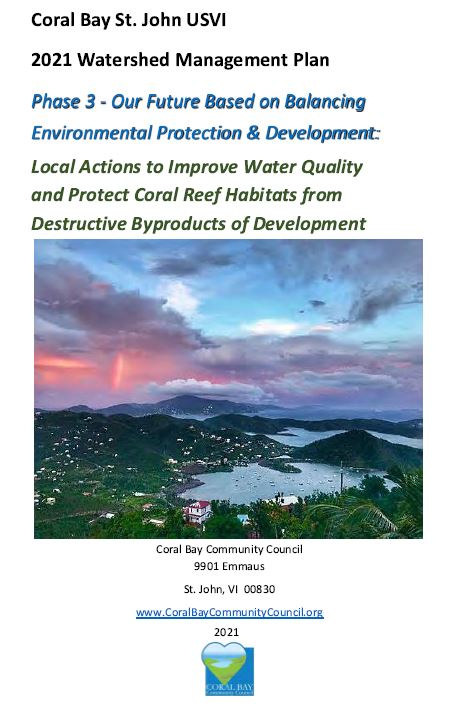 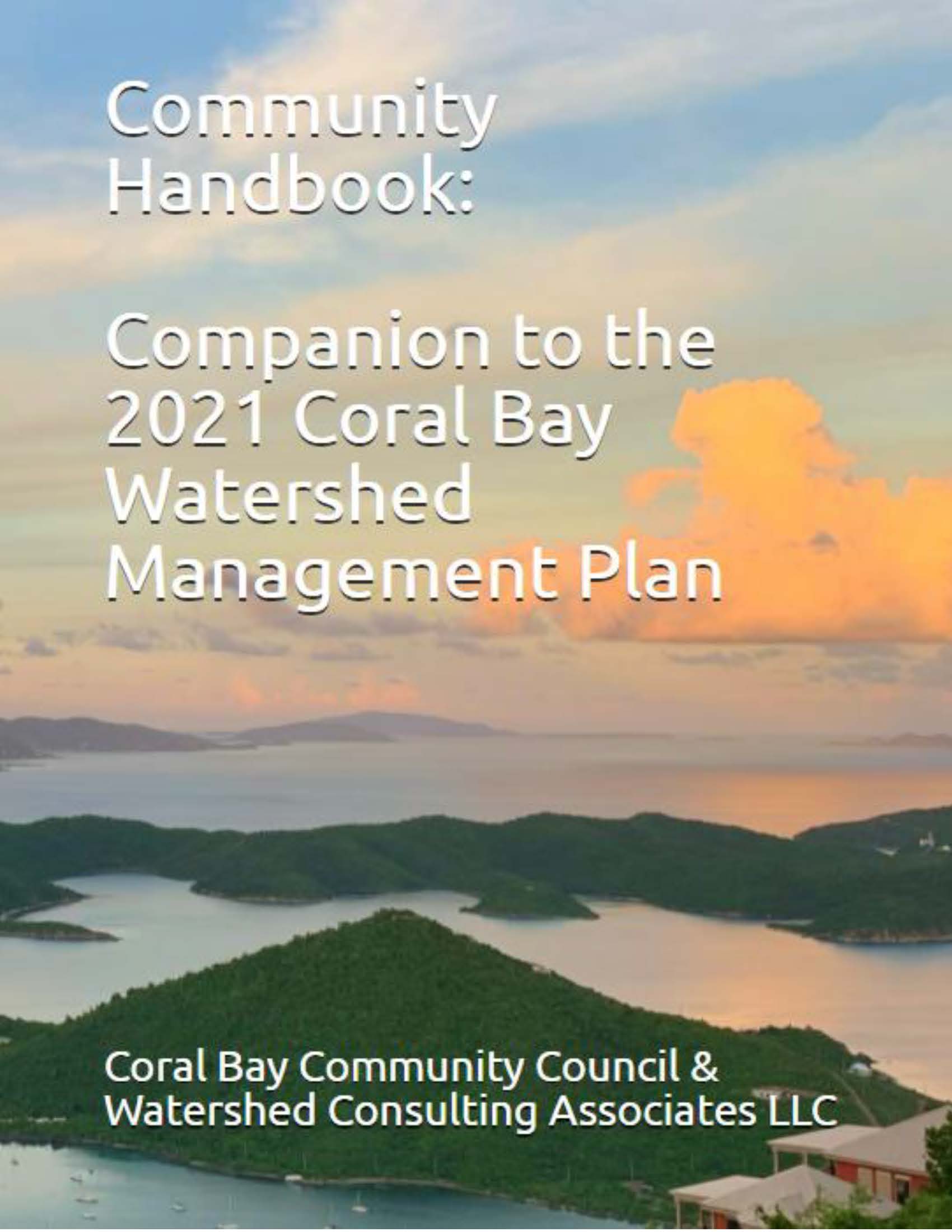 RCAP Solutions is a long-time collaborator of CBCC. In addition to contributions made to support this plan, our team in the Caribbean has a extensive history of partnering with the council to provide vital education to industry professionals as well as residents surrounding drinking water, wastewater, and solid waste management.